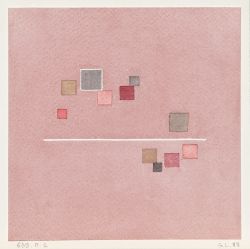 Nothing is less improvised than the work of Guy de Lussigny. And yet a general impression, borne out by his work on paper, brings to mind the Commedia dell’arte. Lussigny loved the theatre and he loved Italy; it was there he shopped for his colours.

His portfolios, carefully sorted before his death, contain gouaches and watercolours that you leaf through as if turning the pages of precious books. The varied compositions range from near monochromes to alliances of colour elaborated with an art that echoes the art of the illuminators, at times mixing golds and silvers. Clouds of squares placed side by side, overlapping or fitted inside each other join in a sort of suspended juggling. Somersaults that partake of a subdued theatricality around the Harlequin that is the world, and whose apparel Guy de Lussigny decomposes with care into its elementary motifs, devoting to each of them one or several gouaches or, more rarely, watercolours.

His work is born of a discreet and dogged ambition, that of contemplating the multiple facets of light. For someone like Guy de Lussigny, the impossible patiently sets about achieving its assigned task. When Lussigny’s work is encountered otherwise than by the immediacy of its aesthetic vibrations, it reveals a thought that is familiar with Descartes’ Discourse on Method…